What makes a perfect pilot episode?

An inciting incident that leaves the viewer longing for more.

A crafted group of characters that inhabit an enticing, atmospheric world of their own.

Story structures, themes and motifs that are engaging but also set the foundations for future season-long narratives.

The Overlook’s Perfect Pilots series will analyse perfect examples of pilot TV shows: examining how their creators combine all these aspects with their own artistic sensibilities to create beautiful, funny and unforgettable pieces of television.

“Yeah, the first episode is a bit slow, but stick with it because it gets better” or “I know it seems a bit dull, but it’s worth sitting through. I promise you, best thing I’ve watched in YEARS.”

That’s what they say isn’t it? Your tiresome friends who only ever talk to you about TV shows they’ve watched because your friendship is dwindling away into the ether of time. But wouldn’t it be great if they didn’t have to say that? Wouldn’t it be just fantastic if writing rooms could get all that BORING scene setting and character building out of the way, so we can all just stop wasting time and be mates again as we drift towards the abyss?

Well, take note everyone, your friendships are saved by this perfect pilot episode that wraps its scene setting into a gloriously entertaining half hour of television:

The opening scene to the pilot episode of Community is a prime example of how you make exposition entertaining:

In this short 2 minutes and 9 seconds, we meet all but one of the main characters in the show whilst the scene is thoroughly set.

Following this disastrous speech, we are also introduced to Jeff Winger (the main protagonist of the show) and Abed Nadir, who will turn out to be the pop culture obsessed heartbeat of the show.

Abed overshares his entire back story to a half-listening Jeff in a motor-mouthed monologue before introducing himself. Jeff then introduces the first plot point that will pervade the rest of the first season by asking:

“What’s the deal with the hot girl from Spanish class? I can’t find a road in there.”

His pursuit of Britta, and her interest/disinterest in him, will serve as the main narrative arc that underpins the entire first season. Abed replies and overshares Britta’s backstory this time, which leads Jeff to say that he sees Abed’s value now.

Abed’s revelation of “that’s the nicest thing anyone has ever said to me”displays a longing in Abed for human understanding, as well as a slight glint of hero worship for Jeff (a theme that will apply to both Abed’s relationship with Jeff, as well as the rest of the group’s).

In this first scene, we have been given the motivations of 5 characters (Jeff, Britta, Shirley, Pierce, Troy); an introduction to the well-meaning but idiotic Dean Pelton; the main catalyst that sparks the episode and the series into motion (Jeff’s interest in Britta); the backstory of Abed; and revealing dialogue from the two main protagonists of the show (Jeff and Abed).

All this information is packaged in an effortlessly entertaining couple of minutes and lays the foundation for the rest of the episode. 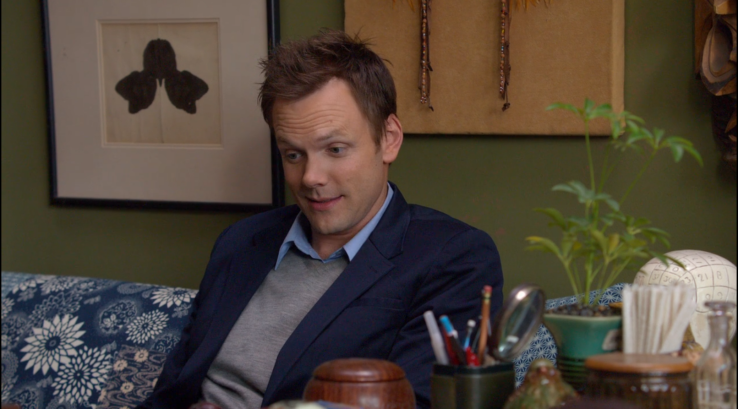 In the very next scene, we learn why Jeff is at Greendale. During his discussion with Professor Duncan (an old client he got off a DUI by making parallels with 9/11), he reveals that he has been suspended from being a lawyer after his law degree was discovered as being “less than legitimate”. We also learn that he intends to use his gift of the gab, and his leverage over Professor Duncan, to take the easy road and coast through community college life with the least amount of effort. He blackmails the Professor into getting him the answers to every test that he will have to take before proclaiming:

“If I wanted to learn something, I wouldn’t have come to community college.”

The rest of the episode plays out as a long lesson for Jeff that he can no longer take the easy road if he wants to get what he wants.

Jeff wants to get to know Britta, and tricks her into believing that he is a Spanish tutor who is taking the class as an easy win. He says he runs a study group that she should attend (a rouse to get her to spend some alone time with him).

Jeff’s plan soon goes off the rails as Abed joins the group after being invited Britta (who sees Jeff’s intentions for what they are but still believes that he is a tutor). He struggles to find some control in the situation due to Abed’s lack of awareness for social cues, and momentarily flees the scene to talk with Professor Duncan, who may just have the answers that he needs to get Britta on side.

His meeting with Duncan reveals more about Jeff’s character. He is the quintessential slimy lawyer with a flexible moral compass. When asked about the difference between right and wrong, Jeff states:

“I discovered at a very early age that if I talk long enough, I can make anything right or wrong, so either I’m God, or truth is relative. And in either case, Booyah.”

This proclamation shows the arrogance-bordering-on-narcissism of Winger, as well as his coping strategy for this tumultuous time in his life: talk until you get what you want.

He then returns to the study room to regain control of his situation, but finds that things have got even more out of hand.

Britta is nowhere to be seen, but Abed is still there. Britta has instead been replaced by a remedial teen, a middle-aged divorcee, an old person keeping their mind active as they circle the drain of eternity, and Annie, a goodie-two-shoes student who questions Jeff’s credentials as a tutor and wonders why she heard about this study group through second-hand channels.

Jeff splits the scene because he is in over his head.

That is until he is accosted outside by a smoking Britta, who dangles the prospect of dinner as a reward for completing their study group.

Jeff decides to rush through the study group by making them “untutorable”.

The next scene is the first example of what will become a regular scene for Community:

A group of misfits sat around a table in a study room, finding commonalities and frictions with each other in a dysfunctional, makeshift surrogate family.

We find out more about our main characters through the conversation in this scene:

Jeff recognises that he can use the vulnerabilities that each character exposes to his advantage (typical lawyer) and actively encourages the group to talk about any “unresolved tensions”.

He stirs the group up into an argument that ends with Abed quoting from the Breakfast Club to break the tension.

Jeff then gets a call off Duncan telling him to meet him in the parking lot. He leaves momentarily, but encourages the group to leave no stone unturned.

Duncan gives Jeff the answers in the exchange for his car, and Jeff reluctantly accepts. Turns out he will do anything to take the easy way out.

He returns to the study room triumphantly before he is once again accosted by Britta. This time she confronts him about his true intentions:

“Wait, this is a game to you? You put human beings into a state of emotional shambles just to get a shot at getting into my pants?”

Shocked that she can’t see that for the compliment that it is, he takes a plea deal of dinner with Britta in exchange for cleaning up the emotional mess he has made in the study room.

What follows is a trope of the show that will become so regularly used that it will be pastiched in an entire Season 2 episode ‘Paradigms of Human Memory’:

This speech highlights Jeff as the leader of the group, and as the head of this burgeoning dysfunctional family. His rousing speech seems to have worked. Everyone is back on side, and his mess has been cleared up. That is until Britta pulls the rug out from under him and reveals his true intentions and actions to the group.

As a last gasp at regaining control, and to save some face, he flouts the answers that he has just been given from Duncan and says he will share them with anyone who wants them.

He leaves the study room with some semblance of control over his own future, which is then uprooted from him when he finds that the test answers are just blank pieces of paper. Except for one that reads:

When he realises this, Jeff finally comes to terms with the lesson that this whole day has been trying to teach him. You can’t win around here with your old lawyer tricks because you will get outsmarted by a third-rate community college professor.

You can’t take the easy road at Greendale.

As Duncan says when Jeff confronts him about the fake answers:

“The tools you have acquired to survive out there will not help you here at Greendale. What you have my friend is a second chance at an honest life.” 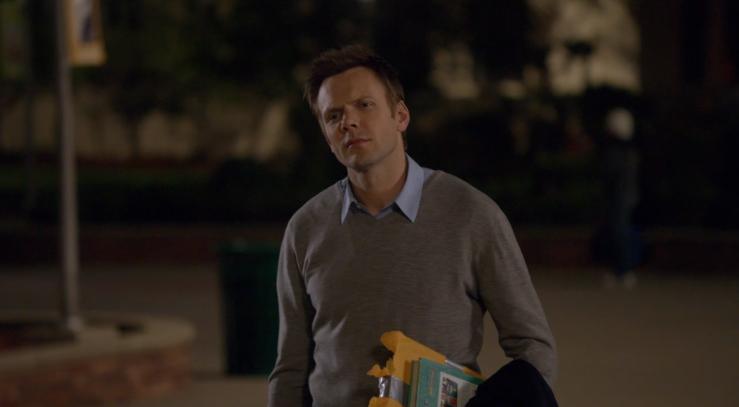 Jeff returns to the quad outside the study room, slightly crestfallen from actually having to learn a lesson. He is joined by members of the study group who have gotten nowhere with their studies despite Jeff leaving.

Seeing that Jeff has learnt some form of lesson, Britta and the group reluctantly ask Jeff to rejoin and study Spanish with them as they have a test tomorrow.

Before they head back to the study room, Abed tells Jeff:

“I’m sorry I called you Michael Douglas, and I see your value now.”

“That’s the nicest thing anyone has ever said to me.” Jeff says to himself.

The episode has come full circle. All characters, relationships, dynamics, themes and some tropes have been introduced. The protagonist’s struggle has ended as well: Jeff has both accepted, and been accepted into, an honest life. He is now part of a community that will make him a better person.

And thus ends the pilot episode of a TV show that is streets ahead of many others: Community.