It is no secret that family dysfunction and Wes Anderson films go hand in hand. Whether it be the tumultuous Tenenbaums reverting to their teenage-selves to deal with the return of their abrasive patriarch, or the three brothers of The Darjeeling Limited going on a spiritual train journey across India to exorcise the guilt of missing their father’s funeral; Anderson’s films often provide a personal journey of escapism for their protagonists that enable them to come to terms with the realities of a family crisis. Moonrise Kingdom, a coming-of-age tale of youthful rebellion on a New England island in 1967, is perhaps the most notable example of this Andersonian trope and, arguably, the director’s most successful exploration of it stylistically.

At the heart of Moonrise Kingdom are two young protagonists finding ways to cope in their own personal worlds of distress. Suzy Bishop (Kara Hayward) escapes her emotionally repressed and semi-tragic family life through her storybooks of adventure, whilst orphan Sam Shakusky (Jared Gilman) escapes his frustrated and lonely existence in an orphanage through his duties as a Khaki Scout at Camp Ivanhoe. The two recognise this mutual emotional state and hatch a plan to elope on their own adventure across the island. They take with them their cultural tools of escapism: Suzy has her books and records, and Sam has his boy scout survival tools.

These tools of escape enable the two twelve-year-olds to embark on a journey of self-discovery, young love and reconciliation with a world that they are only beginning to understand. They serve as a toolkit for these two young, emotionally stunted people to explore the wider world and escape their home lives.

Anderson not only incorporates this trope of escapism through art and self-reliance into the plot, but through the many musical and classical allusions in the film. The director utilises the works of Benjamin Britten, a classical composer from the early 20th Century, to drive the narrative forward, as well as complement the theme of youthful rebellion in the film.

The Young Person’s guide to the Orchestra

NERDS: Look out for the subtle hint of Alexandre Desplat’s score when the grandfather clock chimes at the beginning of the scene.

The opening scene of Moonrise Kingdom is masterfully composed with several moving dolly shots that introduce each character of the the Bishop household. The scene is scored by a diegetic vinyl record of Benjamin Britten’s “The Young Person’s Guide to the Orchestra”.

The long shots that introduce the Bishop family are punctuated with centered shots of Suzy looking outside of her home, searching for something whilst looking through binoculars. She is searching for an escape from her familial constraints. Britten’s composition scores our introduction to all the familial characters relating to Suzy, introducing each one as a piece of the orchestration of the film. The music highlights each family member as being integral to Suzy’s emotional state, they are like the individual pieces of the orchestra that come together to form a whole. Suzy Bishop is portrayed from the offset as being orchestrated by her family surroundings. She is both integral, insignificant and a product of her surroundings.

Furthermore, Britten’s music is an instructive piece of children’s art that intends to inform and teach a “young person” about the intricacies of an orchestra, enabling them to understand how several separate parts come together in harmony. The purpose of the music adds a further layer of meaning, as it scores the introduction of Suzy’s family, hinting at her longing to understand how her own identity fits into her role in the family, as well as the wider world.

Finally, the music also soundtracks Suzy’s longing for change, love and escape from her familial trappings, serving as a basis for her adventure of understanding. Art, literature and music are her tools of escapism, and Britten’s music is the first instance in the film that serves as a “guide” for Suzy to use these tools to understand her place in the world.

The integral relevance of Britten’s work to the film’s meaning becomes wholly apparent during the denouement of the film, which incorporates another of his works: Noyye’s Fludde. The full weight of Britten’s relevance can only be understood as part of the bigger picture, one that details the journey of Sam Shakusky and his Khaki Scout troop at Camp Ivanhoe. 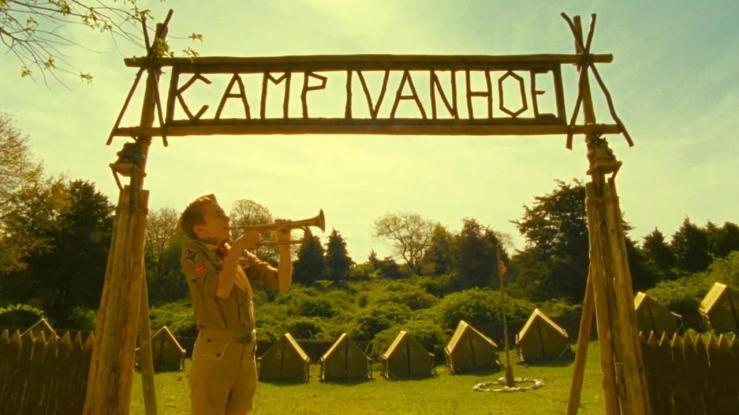 Sam Shakusky is an outsider. He is an orphan who doesn’t fit in at the orphanage, and his only true refuge from this unforgiving house is Camp Ivanhoe. However, even this camp is not an idyll for the troubled pre-teen, as he is not initially accepted by his troop of Khaki Scouts. The camp does serve as a springboard for Sam’s maturity though. It provides him with the skills and tools embark on his elopement with Suzy, and his lack of acceptance into the group only encourages him further to “fly the coop“.

Without the survival, bushcraft and tent-making skills Sam acquires in the Khaki Scouts, his escape into a shared journey of love and self-discovery with Suzy would not be possible. It is these skills that lay the tent in their secret in-let, and set the scene for these two young people to explore their own identities, as well as each others. His self-reliance and interest for the outdoors provide a safe space for their burgeoning young love along a treacherous route of inhospitable environments.

The skills he has learnt from the Khaki Scouts enable his escape from a cruel world of orphanage, but they also provide him with skills of self-reliance that cement his identity and place in the wider world. They provide a space of sanctuary whilst encouraging his journey into adulthood. The Khaki Scouts of Camp Ivanhoe are therefore his surrogate family. A dysfunctional family outfit that rejects him at first before accepting him and inevitably supporting his quest of youthful love and rebellion with Suzy.

Imagine that the thematic narrative of the film is portrayed, in that most Wes Anderson of ways, as an overhead shot of a beautiful, ornate and antique trunk. The trunk is opened carefully and swiftly by a set of hands that sport a pair of leather gloves. The hands then move out of shot to allow the two young protagonist’s to posit their tools of escape. Suzy’s hands enter shot, and she places into the trunk her record collection and player, her adventure novellas and a pair of binoculars. Sam’s hands then enter shot, placing in the trunk his Khaki Scout penknife, his coonskin hat and his Camp Ivanhoe badge. His hands retreat from the frame, and there is a scuffling sound heard off-screen. A hand each, one Sam’s, one Suzy’s, returns to the trunk, holding between them a 7″ LP of Benjamin Britten’s The Young Person’s Guide to the Orchestra. They then place it on top of their belongings. The hands retreat then return as individuals, both placing their final identical objects into the trunk, the fox costumes from the church hall production of Noyye’s Fludde.

The climactic sequence of the film, and the events leading up to it, sees Sam and Suzy eloping once again, but this time with the combined strength and support of each other’s tools of escape. Sam’s Khaki Scouts, who originally ostracized him from the group, help Suzy escape from her home to elope with Sam for a second time. This act of rescue allows the couple to fulfill their desire of being together with an unofficial wedding ceremony, before escaping on a Khaki-scouted boat to start their new lives together.

The couple never make it to their destination due to the impending storm, and being pursued by The Bishops, Captain Sharp, Social Services and Scoutmaster Ward eventually leads them to the island’s church (the scene of their first meeting), where the township of New Penzance are taking refuge from the storm by watching the local production of Noyye’s Fludde.

Noyye’s Fludde is a one act opera, penned by our old friend Benjamin Britten, that is intended to be acted by children and whose plot details the story of Noah’s ark. The production requires the young actors to be dressed as all the different animals on the ark, and Sam and Suzy hide from their pursuers by disguising themselves as part of the production, keeping their dream of youthful escapism alive.

Sam and Suzy camouflaging themselves within the opera of animals is a stark carnivalesque image, evoking allusions to classical cultural representations of this theme within literature and art (most notably the wedding masque in The Tempest). This imagery ties with the classical cultural weight of Benjamin Britten’s music and the grandiose expression of the art of opera, and also pairs this with the Shakespearean allusions throughout the film (explicitly the inclusion of a wedding scene, an omniscient narrator and the obvious pathetic fallacy allusion to The Tempest). These allusions cement the notion of the classical idea of the carnivalesque as central to the thematic conclusion of the film. By disguising themselves in a carnival of animals (which is incidentally the name of another classical musical composition for children), the young couple are the emblem of the carnivalesque idea of revealing “the natural lout beneath the cassock“, they are disguising themselves to reveal themselves to a world outside of childhood misery.

The climax of the film ends with the couple ascending the steeple of the church to keep their dream of youthful escape alive. They are eventually talked round to abating their escape when Captain Sharp formally adopts Sam there-and-then, only for the steeple to be struck by lightning. The pair survive though, as Captain Sharp catches the both of them before they fall to their death. Their storm of youthful revolt has gone out with a literal bang.

Britten’s music has scored the beginning, the middle and the end of this journey for contentment and escape. His music provided a blueprint for the two young people to embark upon a journey of self-discovery and young love using their cultural tools of escape. It provides a “Young person’s guide to finding their place in the world”. Like the fugue at the end of his “Young Person’s Guide to the Orchestra”, the film ends with a final number where everything has come together to a resolution of complete harmony.

The film ends as it began, in the Bishop household whilst “The Young Person’s Guide to the Orchestra” record plays, only this time Sam is there seemingly painting the scene, dressed fully in his new “Captain Sharp” uniform. He leaves out the window whilst saying bye to Suzy, off to resume his duties with Captain Sharp. Suzy looks after him with his binoculars before blowing him a kiss. The camera then pans to Sam’s painting, revealing it to be the cove in which Sam and Suzy lived out their fantasy of escape, which they have named “Moonrise Kingdom”.

This cyclical ending shows the two young protagonists as content with their situations, having found an escape from the lives they knew. Sam has found a place where he belongs, and can now rely on a father figure and the girl he loves. Suzy can now see an escape from her familial trappings through her binoculars: Sam.

Both characters’ have utilised their tools of escape to realise their places within a tempestuous existence.

Other great articles on Moonrise Kingdom: